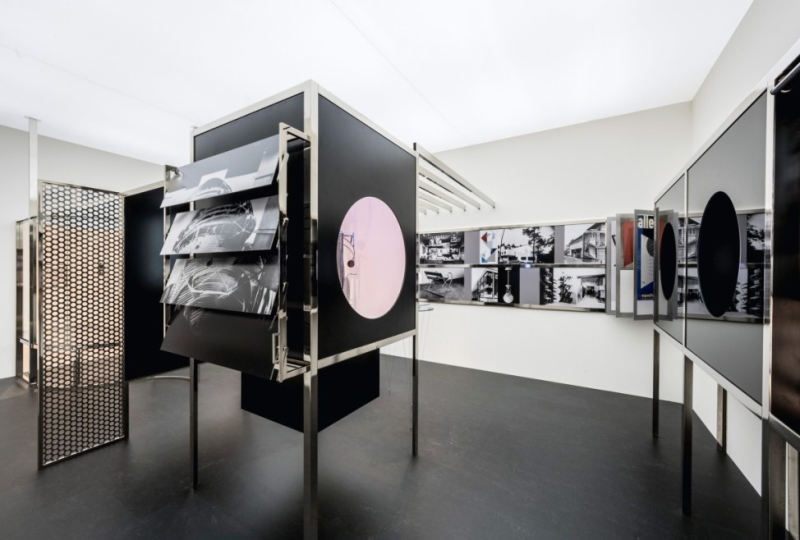 If he had looked for one in other experiments of his own time, could László Moholy-Nagy have found a blueprint for the experience that his Room of the Present (Raum der Gegenwart) (1930) sought to create? If we look in our own present, where, if anywhere, could a blueprint of this kind be found? Where exactly is this present then, and what kind of stuff is it made of?

Unrealized during the artist’s lifetime and recreated for the Future Present exhibition on view in 2016 at the Guggenheim Museum, the Room positioned together a series of Moholy-Nagy’s remarkable works of design, photography, film and their intersections in an attempt to blend them seamlessly into an immersive experience. Moholy Nagy wanted to design an environment in which the entire horizon of experimental culture - film, architecture, design, painting, graphics, photography, and more - could become a mélange of organically interconnected interventions, united not by shared themes, materials or media but by an allegiance to radical experimentation as their guiding principle.

A central idea in this milieu was the desire to transcend medium-specifity outright, in a totalizing way; to break through the boundaries of conventional genres, media and materials in order to lay bare a deeper commonality - a shared ethos of contestation of all that these encumbrances represent. Though not often expressed with this level of clarity, by 1930 this quintessentially modernist aspiration was already becoming a common theme in other interventions of that time, and it would remain central to modernist culture for quite some time thereafter.

Moholy-Nagy’s room was a more or less literal room, a space delimited in an unconventional but direct sense by architectural space, yet because of the extensive ground it sought to cover aesthetically and culturally, its resonance extended far beyond the partitions that contained it.

It is both a bit facile and very tempting to compare the space that this installation wanted to instantiate to our now-familiar but still fundamentally basic understanding of “the internet” as a dispersed, atomized and interconnected realm of exchanges, confusions and transmissions - a now-gargantuan realm where disparate fragments of information are de-composed, re-combined and juxtaposed against each other continously to create a similar kind of mélange.

If nothing else, the small slice of avant-garde culture Moholy Nagy was concerned with possesses a level of homogeneity that this fundamentally unruly space lacks. This unruly realm, so evocatively pictured in Werner Herzog’s film Lo and Behold, plays by a set of rules both less aesthetically rigorous and more culturally unpredictable altogether.

But if the question of whether the internet “dreams of itself”, as Herzog wonders, is worth asking (I believe it is, weird as it may be), then it may also make sense to ponder to which extent the present that Moholy Nagy was dreaming of was a fundamentally accurate version of the same present we are still attempting to understand almost a century after the dream took place.